I Hate Everyone...Starting with Me (Paperback) 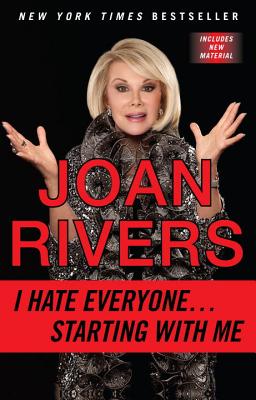 NOW WITH NEW MATERIAL FOR THE PAPERBACK EDITION

"How do I love thee? Let me count the ways." --Elizabeth Barrett Browning, 1850 "How do I hate thee? How much time do you have?" --Joan Rivers, today, about two-ish Joan Rivers, comedienne, actress, jewelry monger, and an award-winning international star (she can sneer in eight different languages) lives by the golden rule: Do unto others before they do unto you--and for God's sakes, do it funny Her career in comedy may have begun with self-loathing, but, after looking at the decrepitude around her, she figured, "Why stop here when there are so many other things to hate?" With all of her experiences, Joan has looked down at, turned away from, and thrown up over a lot of hateful things, deplorable places, and despicable people. Thank God she took notes. Here--uncensored and uninhibited--Joan says exactly what's on her mind...And HER mind is a terrible thing to waste. She proudly kicks the crap out of ugly children, dating rituals, funerals, and lousy restaurants. She nails First Ladies, closet cases, and hypocrites to the wall. She shows no mercy towards doctors and feminists, and even goes after Anne Frank and Stephen Hawking. Joan lets everyone--including herself--have it in this one hundred percent honest and unabashedly hilarious love letter to the hater in all of us. This is absolute Joan Rivers. You gotta love her. Even if she hates you. Includes new material

Comedienne, Emmy Award-winning TV host, Tony-nominated actress and CEO, Joan Rivers was an icon of American culture, a bestselling author, Celebrity Apprentice winner, writer, producer, director, and savvy businesswoman who overcame great odds to reinvent herself time and time again. She hosted E! Network's popular series Fashion Police, and starred with her daughter, Melissa, in their own weekly reality show, Joan and Melissa: Joan Knows Best? on WEtv Network. Her critically acclaimed documentary, Joan Rivers: A Piece of Work premiered in theaters nationwide and is available on DVD. Amongst all of her success, Joan's most joyous triumph was being a mother and grandmother. She died in 2014.

“…more punch lines per paragraph than any book I’ve read in years.” —The New York Times

“An entertaining rant…The only thing missing is the sound of a drumroll and cymbals to feel as though one is sitting in a nightclub watching a live comedy marathon…A raucous, biting look at life.”—Kirkus Reviews

“Nobody, but nobody, can hate like Joan Rivers. It is a gift. It is also shocking, the things she makes us laugh at…Joan Rivers is extraordinary, but she's not for the easily offended—or for anyone who gets offended at all. ”—People