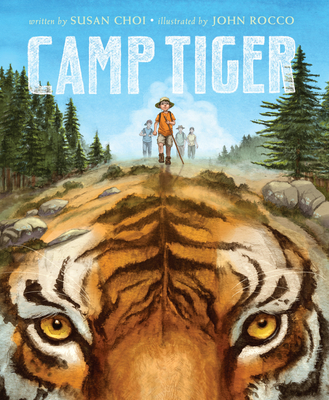 Every year, a boy and his family go camping at Mountain Pond.

Usually, they see things like an eagle fishing for his dinner, a salamander with red spots on its back, and chipmunks that come to steal food while the family sits by the campfire.

But this year is different. This year, the boy is going into first grade, and his mother is encouraging him to do things on his own, just like his older brother. And the most different thing of all . . . this year, a tiger comes to the woods.

Susan Choi's first novel, The Foreign Student, won the Asian-American Literary Award for fiction. Her second novel, American Woman, was a finalist for the 2004 Pulitzer Prize. Her third novel, A Person of Interest, was a finalist for the 2009 PEN/Faulkner Award. In 2010 she was named the inaugural recipient of the PEN/W.G. Sebald Award. Her fourth novel, My Education, received a 2014 Lambda Literary Award. A recipient of fellowships from the National Endowment for the Arts and the Guggenheim Foundation, Susan teaches fiction writing at Yale and lives with her family in Brooklyn.

This is her first book for children.

John Rocco is the #1 New York Times bestselling author and illustrator of many award-winning books for children, including the Caldecott Honor-winning picture book Blackout. He is also the illustrator for the internationally bestselling series Percy Jackson and the Olympians, The Kane Chronicles, The Heroes of Olympus, and Magnus Chase and the Gods of Asgard. His most recent titles include the fully illustrated version of Percy Jackson and the Olympians and Big Machines: The Story of Virginia Lee Burton. John lives in Rhode Island with his wife, daughter, two wild cats, and one very rambunctious dog named Lucy.

★ "Caldecott Honoree Rocco's stunning paintings feature a range of perspectives...allowing [them] to leap off the pages. Youngsters will thrill at the possibilities presented in Pulitzer Prize–winner Choi’s tale, which combines fantasy with the everyday."—Booklist, starred review

★ "The mixed media illustrations are stunning. This beautiful paring of text and illustrations is an excellent choice for group sharing and can spark discussion about ways to cope with new situations."—The School Library Journal, starred review

★ "Youngsters will welcome this fantasy-touched acknowledgment of the challenges of growing up.” –The Bulletin of the Center for Children’s Books, starred review

“A moving story about a young boy finding his independent spirit.” --Shelf Awareness