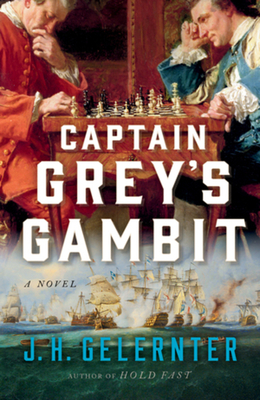 This is book number 2 in the A Thomas Grey Novel series.

A taut historical thriller for fans of The Queen’s Gambit and James Bond.

December 1803: A French invasion fleet is poised to cross the Channel and storm the beaches of southern England. A member of Napoleon’s inner circle—disaffected by Napoleon’s creeping tyranny—contacts the British naval intelligence service in hopes of defecting to London. His escape plan calls for a rendezvous at an international chess tournament in Frankfurt—a rare opportunity for him to travel outside France. Naval intelligence sends its top man—and best chess player—Captain Thomas Grey, to orchestrate the Frenchman’s escape to England. But Grey’s mission changes dramatically when the defector demands that his pro-Napoleon daughter come with him—expecting Grey to act not just as escort but kidnapper.

J. H. Gelernter lives in Connecticut. He is the author of the Thomas Grey novels, Hold Fast and Captain Grey’s Gambit.

[A] superior sequel to 2021's Hold Fast…. Gelernter’s clever premise matches his well-rounded and plausible lead, and vivid depictions of the developments in the conflict between England and France enhance the suspenseful espionage plot.

In the second book of his Captain Grey series…Gelernter continues to distinguish his character from his literary influences, chief among them Ian Fleming’s James Bond, with deliberate flourishes…. [M]any rich historical details…populate the novel with obvious care.
— Kirkus Reviews