We'll Always Have Casablanca: The Legend and Afterlife of Hollywood's Most Beloved Film (Paperback) 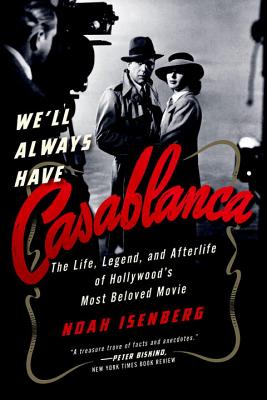 “Even the die-hardest Casablanca fan will find in this delightful book new ways to love the movie they were certain they could never love more.” —Sam Wasson, best-selling author of Fifth Avenue, 5 A.M.

Casablanca is “not one movie,” Umberto Eco once quipped; “it is ‘movies.’” Film historian Noah Isenberg’s We’ll Always Have Casablanca offers a rich account of the film’s origins, the myths and realities behind its production, and the reasons it remains so revered today, over seventy-five years after its premiere.

Noah Isenberg is professor and chair of the department of radio-television-film at the University of Texas at Austin, the author of We'll Always Have Casablanca, Edgar G. Ulmer: A Filmmaker at the Margins, editor of Weimar Cinema, and the recipient of an NEH Public Scholar Award.

We'll Always Have Casablanca is a hugely readable and entertaining look at how Casablanca came to be, and how it came to be such an indelible part of American pop culture.

Combining trenchant analysis of the film’s poetic and political power with a well-researched and playful account of its legacy, We’ll Always Have Casablanca is a necessary book and perhaps even an urgent one.

Anyone interested in the magic of movies will relish this book.
— Tavo Amador - Bay Area Reporter

As Noah Isenberg details in his excellent new book We’ll Always Have Casablanca, the 1942 film is a case study of how history gets depicted for popular entertainment, but it is also a powerful example of how the Hollywood machine produced work that intersected with political commitment while still holding fast to its romantic conventions.

Four out of four stars.… Isenberg’s great contribution is tying together the production [of Casablanca] and its legacy.

Noah Isenberg brings an appropriate passion to his pop analysis of [Casablanca], along with a delight of details and some savvy reassessments.

Isenberg gives us… a rich miscellany of material that will delight fans of both the film and Hollywood’s golden era. His research is clearly second to none.
— Lucy Scholes - Times Literary Supplement