Rose Kennedy: The Life and Times of a Political Matriarch (Paperback) 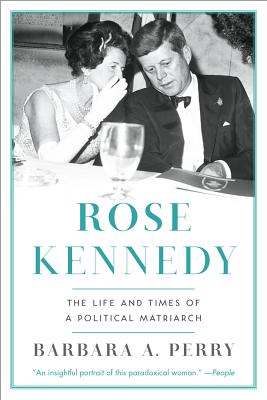 "An insightful portrait of this paradoxical woman." —People

In this definitive biography—the first to draw on an invaluable cache of newly released diaries and letters—presidential historian Barbara A. Perry unearths the complexities behind the impeccable persona Rose Kennedy showed the world. Rose Kennedy provides unequaled access to the life of a remarkable woman who witnessed a century of history and created the public image of one of America’s preeminent families.

Barbara A. Perry, a well-known authority on the Kennedys, is Gerald L. Baliles Professor and director of Presidential Studies at the University of Virginia's Miller Center, where she co-directs the Presidential Oral History Program. As part of her extensive research on the American presidency, she interviews prominent members of previous administrations. She has authored or edited fourteen books including Rose Kennedy: The Life and Times of a Political Matriarch and Jacqueline Kennedy: First Lady of the New Frontier, among other works.

The portrait of a lady whose solid grounding in Boston politics and serene Roman Catholicism carried her through America’s most corrosive century, and in the telling, it’s clear that Kennedy never played the victim to history.
— Matt Damsker

A fuller picture than ever before…Perry writes with compassion and brings keen insight into what Rose Kennedy’s own words tell us about this complex woman.
— Amy Scribner

A more complete portrait of the matriarch of one of America’s eminent political family dynasties.

Perry’s biography is a finely crafted, comprehensive account of one of the most driven women in the shadows of American political history…While there are untold numbers of books on the Kennedys, Perry adds archival details and nuance to our understanding of Rose. Kennedy completists and novices alike are sure to find the book fascinating as it further reveals the perspective of the strong woman behind the dynasty.
— Lisa Guardarini

Barbara Perry has done it again! Rose Kennedy is the much needed, balanced biography of the grand matriarch of American politics. Whether it was helping the disabled, raising children, or playing ward boss, Mrs. Kennedy was a force of nature.