Come Fly the World: The Jet-Age Story of the Women of Pan Am (CD-Audio) 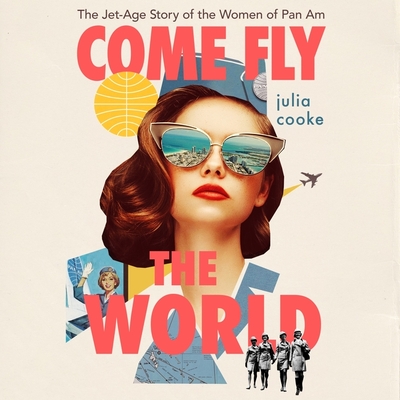 By Julia Cooke
$28.00
Have a question? Please let us know and we will reply as soon as we can. Thanks!

Glamour, danger, liberation: in a Mad Men–era of commercial flight, Pan Am World Airways attracted the kind of young woman who wanted out, and wanted up

Required to have a college education, speak two languages, and possess the political savvy of a Foreign Service officer, a jet-age stewardess serving on iconic Pan Am between 1966 and 1975 also had to be between 5′3" and 5′9", between 105 and 140 pounds, and under 26 years of age at the time of hire.Cooke’s intimate storytelling weaves together the real-life stories of a memorable cast of characters, from small-town girl Lynne Totten, a science major who decided life in a lab was not for her, to Hazel Bowie, one of the relatively few Black stewardesses of the era, as they embraced the liberation of their new jet-set life. Cooke brings to light the story of Pan Am stewardesses’ role in the Vietnam War, as the airline added runs from Saigon to Hong Kong for planeloads of weary young soldiers straight from the battlefields, who were off for five days of R&R, and then flown back to war. Finally, with Operation Babylift—the dramatic evacuation of 2,000 children during the fall of Saigon—the book’s special cast of stewardesses unites to play an extraordinary role on the world stage.

JULIA COOKE is a journalist and travel writer whose features and personal essays have been published in Time, Smithsonian, Condé Nast Traveler, and Saveur. She is the author of The Other Side of Paradise: Life in the New Cuba. The daughter of a former Pan Am executive, Cooke grew up in the Pan Am “family,” a still-strong network across the globe. She lives in Vermont.

[A] limber, well-researched…account of Pan Am World Airways in its glory days is smoothly interwoven with the engagingly complex stories of several longtime flight attendants….An entertaining, insightful look into a gritty and glamorous era in air travel."—Kirkus, starred review

"Come Fly the World tells the story of adventurous women navigating a world on the cusp of change. In confident, clear-eyed, multi-layered prose, Julia Cooke brings to life the true stories of unforgettable Pan-Am stewardesses who defied convention, to seek more from life than they were given. This is a well-researched and fascinating history of air travel, gender equality, and so much more.”—Rachel Khong, author of Goodbye, Vitamin

"Before second-wave feminism came along to challenge the admissions policies of law, medical, and business schools, there were stewardesses—women every bit as daring and determined as their later counterparts in the professions, and having more fun. Julia Cooke’s Come Fly the World reveals an unexpected chapter in American history as inspiring as it is informative—a rollicking, rambunctious ride down the runway of mid-century modern life that flies straight into the headwinds of Civil Rights politics and the Vietnam War."--Megan Marshall, author of Pulitzer Prize-winning Margaret Fuller: A New American Life and Elizabeth Bishop: A Miracle for Breakfast

"Viewing the untold story of jet-age stewardesses through a modern feminist lens, Julia Cooke brings vividly to life a contradictory profession, one that, for all its limitations, offered many women a chance for true liberation. A fascinating telling."—Kate Bolick, author of New York Times bestseller Spinster: Making a Life of One’s Own

“Come Fly the World is a pop passport to another time. Take a social history flight with the women of Pan Am.”—Lily Koppel, author of New York Times bestseller The Astronaut Wives Club