Notes on a Silencing: A Memoir (Paperback) 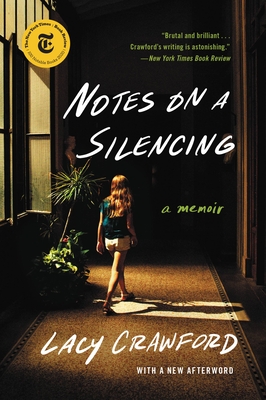 A "powerful and scary and important and true" memoir of a young woman's struggle to regain her sense of self after trauma, and the efforts by a powerful New England boarding school to silence her—at any cost (Sally Mann, author of Hold Still).

Shortlisted for the 2022 William Saroyan International Prize for Writing

When Notes on a Silencing hit bookstores in the summer of 2020, even amidst a global pandemic, it sent shockwaves through the country. Not only did this intimate investigative memoir usher in a media storm of coverage, but it also prompted the elite St. Paul's School to issue a formal apology to the author, Lacy Crawford, for its handling of her report of sexual assault by two fellow students nearly thirty years ago.

In this searing book, Crawford tells the story of coming forward during the state investigation of the elite New England prep school decades after her assault, only to find for the first time evidence that corroborated her memories. Here were depictions of the naïve, hardworking girl she’d been, as well as astonishing proof of an institutional silencing. The slander, innuendo, and lack of adult concern that Crawford had experienced as a student hadn't been imagined; they were the actions of a school that prized its reputation above anything, even a child.

This revelation launched Crawford on an extraordinary inquiry deep into gender, privilege, and power, and the ways shame and guilt are used to silence victims. Insightful, arresting, and beautifully written, Notes on a Silencing wrestles with an essential question for our time: what telling of a survivor's story will finally force a remedy?

“Erudite and devastating… Crawford's writing is astonishing… Notes on a Silencing is a purposefully named, brutal and brilliant retort to the asinine question of 'Why now?'… The story is crafted with the precision of a thriller, with revelations that sent me reeling…” —Jessica Knoll, New York Times

Lacy Crawford is the author of the novel Early Decision. She lives in Southern California with her family.

“Erudite and devastating… Notes on a Silencing is a purposefully named, brutal and brilliant retort to the asinine question of 'Why now?'… The story is crafted with the precision of a thriller, with revelations that sent me reeling… Crawford’s writing is astonishing.”—Jessica Knoll, New York Times

“A riveting, damning exploration of how a single moment can reshape an entire life… [and] a haunting exploration of the systematic ways assault victims are ignored… Crawford’s revelations about the insidious and systematic ways stories of assault are buried left me shaken, moved, angry. By the end, we all understand how rarely women are granted any kind of justice… Crawford does what the best memoirists do: She reaches beyond a single story… in its relentless exploration of power and hubris, Notes on a Silencing is a story that reminds us (because we apparently need reminding again and again) that women are still impotent against institutions and the men who run them… One cannot help but conjure the poised, careful testimony of Christine Blasey Ford and the sputtering, self-righteous rage of Brett M. Kavanaugh… a stunning, audacious attempt to reassert power over her own story.”—Rachel Louise Snyder, Washington Post

“The rigor and elegance of Crawford’s sentences, even while writing about such painful things, lifts this memoir into literary heights… Crawford lays bare the impact of violence on identity. She navigates her trauma surgically by trying to establish the parameters of its lexicon… with the help of therapy, detectives, records she thought lost to time, and a new case brought to the fore, Crawford is forcing the unchecked power of an elite institution to answer for their violations and the victims they shoved into silent hallways of despair.”—Kerri Arsenault, Boston Globe

"Beautifully done... Notes on a Silencing is powerful and scary and important and true. Hats off to Lacy Crawford for telling this harrowing story. It will surely be an eye-opener for a lot of people, but not for me or millions of other women."—Sally Mann, author of Hold Still

“In this devastating account, Crawford presents evidence of how the elite school conspired to silence her. Highly personal yet universal, her brilliant, incendiary memoir lays bare truths about rape culture, misogyny and the rot in America’s most privileged places.”—Kim Hubbard, People (Book of the Week)

“One night last July, while my daughters baked chocolate chip cookies, I settled onto the love seat on our baggy-screened back porch and started reading Lacy Crawford’s memoir, Notes on a Silencing. This is a harrowing exploration of sexual assault; it is not escapist reading, but I still inhaled it in one sitting. When I looked up, the neighborhood was dark. The baking trays had run through the dishwasher’s longest cycle (for cooks who don’t rinse) and the cookies were mostly gone. I slept well for the first time in weeks, my mind full of heartbreak, but also courage and peace.”—Elisabeth Egan, New York Times Book Review

“Crawford writes with clarity and rueful authority… a strong, clear, unimpeachable voice… Notes on a Silencing is as much a work of meticulous investigative journalism as it is a memoir.”—Jenny Shank, Minneapolis Star Tribune

“Maddening and timely, this memoir reveals the cost to victims---and society at large---when powerful institutions protect their reputations, not their pupils.”—Kristyn Kusek Lewis, Real Simple

“Beautifully written… Crawford discovers evidence of institutional silencing and shadowy powers trying to cover up her own case to this day.”—Sarah Kollmorgen, HuffPost

“Crawford uses her storytelling skill to illuminate the myriad ways female students were taught that their desires and bodies were less valuable than---even subject to---those of their male peers… Crawford’s detailed account of her assault and its aftermath relies on an indelible memory as well as careful research… Notes on a Silencing is a ghastly account, beautifully told, of a teenage girl learning that people in power often value reputation above all else.”—Carla Jean Whitley, BookPage (starred review)

“Crawford plums her own life in this story of her time at the St. Paul's boarding school, where she was the survivor of a long-ignored sexual assault. When news of other, similar incidents starts to come out, Crawford is compelled to revisit her own experience and frankly grapple with the way violence, truth, and guilt are handled in our country's most exclusive institutions.”—Adam Rathe and Liz Cantrell, Town and Country

"A shocking, anguished, beautifully written account of Crawford's sexual assault at the elite St. Paul's School in the days before #Me Too---and her belated understanding, after attacks at the school decades later, of just how badly the adults had failed her."—People

"A studied, vulnerable, and maddening account... Crawford melds her personae as a teenage girl, a survivor, and a skilled narrator... Crawford's meditation on the effects of silence, shame, and belief, and the antidotes she had to invent for herself, will add to evolving discussions of sexual assault and power."—Annie Bostrom, Booklist (starred review)

“Crawford recounts the shocking documented facts in her deeply affecting memoir, its extraordinary power resides in her artful, original, and evocative telling of the story and the cover-up.”—National Book Review

"A riveting story of and for our time."—Emily Temple, Lit Hub Most Anticipated Books of 2020

“Propulsive… In a precise, lucid account, the author examines herself and the forces outside her that converged to suppress her voice after a sexual assault at a prestigious school… The facts carry readers along as they would in a crime novel, with clinical details that force observers to imagine the motives and emotions of the perpetrators and victim.”—Jennifer M. Brown, Shelf Awareness (starred review)

"So beautiful it hurts to read... Assaulted by schoolmates, and then betrayed and silenced by her school and mine, Lacy Crawford has found courage to turn pain into searing voice in this beautiful memoir... For St. Paul's School, Notes on a Silencing could begin Truth and Reconciliation, or a chance to be delivered, as the school prayers ask: 'From the cowardice that dare not face new truths, from the lazy contentment with half-truths, and from the arrogance of thinking we know all truths.'"—Lorene Cary, author of Black Ice and If Sons, Then Heirs

"A harrowing, powerful memoir about sexual assault, trauma, and what happens when institutional power is deployed as a weapon against the vulnerable... Crawford's bravery in recounting her own experience speaks to how powerful it is to have these stories told, to show that no one is alone."—Kristin Iversen, Refinery29

"A powerful, topical, and incisive memoir... Trenchant in its observations about the unspoken---and often criminal---double standards that adhere in elite spaces, Crawford's courageous book is a bracing reminder of the dangers inherent in unchecked patriarchal power."—Kirkus Reviews

"Devastating... A stirring memoir of sexual assault and its aftermath."—Publishers Weekly