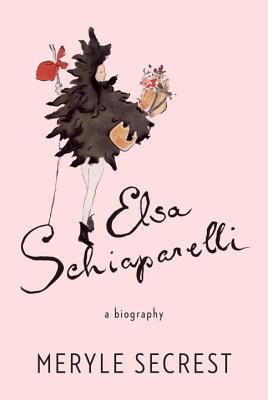 By Meryle Secrest
Email or call for price.
Hard to Find

Her name was Elsa Schiaparelli. She was known as the Queen of Fashion; a headline attraction in the international glitter-glamour show of the late twenties and thirties, feted in Rome (where she was born), Paris, New York, London, Moscow, Hollywood . . . Her style was a social revolution through clothing--luxurious, eccentric, ironic, sexy. Her fashions, inspired, from the whimsical to the most practical--from a Venetian cape of the commedia dell'arte to the Soviet parachute. She collaborated with some of the greatest artists of the twentieth century: on jewelry designs with Jean Schlumberger; on clothes with Salvador Dali (his lobster dress for her, a lobster garnished with parsley painted on the skirt of an organdy dress, was instantly bought by Wallis Simpson for her honeymoon with the Duke of Windsor); with Jean Cocteau, Alberto Giacometti, Christian Berard, photographers Baron Adolph de Meyer, Horst, Cecil Beaton, and the young Richard Avedon. She was the first designer to use rayon and latex, thick velvets, transparent and waterproof, and cellophane. Her perfume--Shocking --was a bottle in the shape of a bust sculpted by Leonor Fini, inspired by the body of Mae West. Her boutique at an eighteenth-century palace at 21 Place Vendome opened into a cage designed by Jean-Michel Frank. American Vogue, in 1927, presented her entire collection as Works of Art. A decade later, she was the first European to win the Neiman Marcus Fashion Award.
Here is the never-before-told story of this most extraordinary fashion designer, perhaps the most extraordinary fashion designer of the twentieth century, in her day more famous than Chanel. Meryle Secrest, acclaimed biographer, who has captured the lives of many of the twentieth century's most iconic cultural figures, among them: Frank Lloyd Wright, Bernard Berenson, and Modigliani, gives us the first full life of the grand couturier--surrealist and embattled figure--whose medium was apparel. "Dare to be different," Schiaparelli advised women, and she lived it to the height; a rebel against convention--social as well as fashion. She designed an otter-fur bathing suit and a hat inspired by a lamb chop. ("I like to amuse myself," she said. "If I didn't, I would die.") Chanel, her arch rival, called her, "that Italian woman who makes dresses." Here is the story of Schiaparelli's rise to fame (as brazen and unique as any of the artistic creations that emerged from her Paris workrooms before World War II); her emotionally starved upbringing in Rome (her mother was part Scottish, part Neapolitan; her father, a prominent medieval scholar specializing in Islamic manuscripts, dean of the faculty of Rome; her uncle, an astronomer famous for his description in 1877 of "canals" on Mars); her years overshadowed by a prettier sister; her elopement with a Swiss-born man who claimed to be a count, disciple of mysticism and the occult--who managed to get himself and his young bride deported from Britain . . . her struggle to care for her polio-stricken daughter, Gogo, as a single and financially destitute mother living in Greenwich Village. Secrest writes of Schiaparelli's keen instincts--an astute businesswoman, she launched herself into hats, hose, soaps, shoes, handbags, in the space of a few years. By 1930, her company was grossing millions of francs a year. Secrest chronicles her exploits during World War II (she managed to escape from Europe to the United States) and, using FBI files, shows that during Schiaparelli's stay in New York, her whereabouts were documented almost week by week; she was never explicitly charged, but the cloud of collaboration lingered long after her return to Paris. As Secrest traces the unfolding of this dazzling career, she reveals the spirit that gave shape to this large and extravagant life, a woman--a force--whose artistic vision forever changed the face of fashion and redefined the boundaries of art.

Meryle Secrest was born and educated in Bath, England, and lives in Washington, D.C. She is the author of eleven biographies and was awarded the 2006 Presidential National Humanities Medal.