How History Gets Things Wrong: The Neuroscience of Our Addiction to Stories (Paperback) 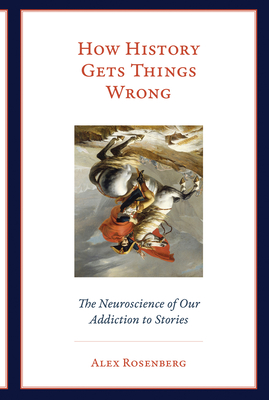 Why we learn the wrong things from narrative history, and how our love for stories is hard-wired.

To understand something, you need to know its history. Right? Wrong, says Alex Rosenberg in How History Gets Things Wrong. Feeling especially well-informed after reading a book of popular history on the best-seller list? Don't. Narrative history is always, always wrong. It's not just incomplete or inaccurate but deeply wrong, as wrong as Ptolemaic astronomy. We no longer believe that the earth is the center of the universe. Why do we still believe in historical narrative? Our attachment to history as a vehicle for understanding has a long Darwinian pedigree and a genetic basis. Our love of stories is hard-wired. Neuroscience reveals that human evolution shaped a tool useful for survival into a defective theory of human nature.

Stories historians tell, Rosenberg continues, are not only wrong but harmful. Israel and Palestine, for example, have dueling narratives of dispossession that prevent one side from compromising with the other. Henry Kissinger applied lessons drawn from the Congress of Vienna to American foreign policy with disastrous results. Human evolution improved primate mind reading—the ability to anticipate the behavior of others, whether predators, prey, or cooperators—to get us to the top of the African food chain. Now, however, this hard-wired capacity makes us think we can understand history—what the Kaiser was thinking in 1914, why Hitler declared war on the United States—by uncovering the narratives of what happened and why. In fact, Rosenberg argues, we will only understand history if we don't make it into a story.

Alex Rosenberg is R. Taylor Cole Professor of Philosophy at Duke University. He is the author of The Atheist's Guide to Reality: Enjoying Life without Illusions and other books.

His patient frustration at humanity's persistent wrong-headedness nicely seasons well-judged chapters that carefully guide the non-scientist through a history – there is no other word for it – of 20th-century neurological discoveries that prove his point.—TIMES HIGHER EDUCATION—

Rosenberg has written a fascinating and challenging book, one that every historian should read and take into account.