The Meaning of Everything: The Story of the Oxford English Dictionary (Paperback) 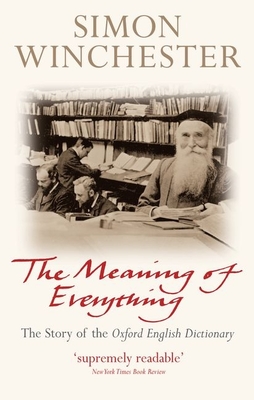 By Simon Winchester Obe
$14.95
Email or call for price.

"The greatest enterprise of its kind in history," was the verdict of British prime minister Stanley Baldwin in June 1928 when The Oxford English Dictionary was finally published. With its 15,490 pages and nearly two million quotations, it was indeed a monumental achievement, gleaned from the efforts of hundreds of ordinary and extraordinary people who made it their mission to catalogue the English language in its entirety. In The Meaning of Everything, Simon Winchester celebrates this remarkable feat, and the fascinating characters who played such a vital part in its execution, from the colourful Frederick Furnivall, cheerful promoter of an all-female sculling crew, to James Murray, self-educated son of a draper, who spent half a century guiding the project towards fruition. Along the way we learn which dictionary editor became the inspiration for Kenneth Grahame's Ratty in The Wind in the Willows, and why Tolkien found it so hard to define "walrus". Written by the bestselling author of The Surgeon of Crowthorne and The Map That Changed the World, The Meaning of Everything is an enthralling account of the creation of the world's greatest dictionary.

Simon Winchester, OBE, is a British writer, journalist, and broadcaster. As a journalist he covered major events, including Bloody Sunday and the Watergate Scandal. He is the author of Atlantic: A Vast Ocean of a Million Stories, The Professor and the Madman, The Map that Changed the World, and A Crack in the Edge of the World, all of which have been New York Times bestsellers.