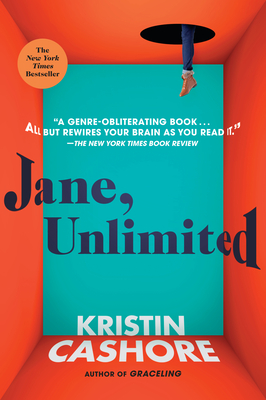 An instant New York Times bestseller—from the award-winning author of the Graceling Realm series—an ambitious novel about grief, adventure, storytelling, and finding yourself in a world of seemingly infinite choices.

Jane has lived an ordinary life, raised by her aunt Magnolia—an adjunct professor and deep sea photographer. Jane counted on Magnolia to make the world feel expansive and to turn life into an adventure. But Aunt Magnolia was lost a few months ago in Antarctica on one of her expeditions.

Now, with no direction, a year out of high school, and obsessed with making umbrellas that look like her own dreams (but mostly just mourning her aunt), she is easily swept away by Kiran Thrash—a glamorous, capricious acquaintance who shows up and asks Jane to accompany her to a gala at her family's island mansion called Tu Reviens.

Jane remembers her aunt telling her: "If anyone ever invites to you to Tu Reviens, promise me that you'll go." With nothing but a trunkful of umbrella parts to her name, Jane ventures out to the Thrash estate. Then her story takes a turn, or rather, five turns. What Jane doesn't know is that Tu Reviens will offer her choices that can ultimately determine the course of her untethered life. But at Tu Reviens, every choice comes with a reward, or a price.

“A genre-obliterating book…all but rewires your brain as you read it.” —The New York Times Book Review

Kristin Cashore grew up in the northeast Pennsylvania countryside as the second of four daughters. She received a bachelor's degree from Williams College and a master's from the Center for the Study of Children's Literature at Simmons College, and she has worked as a dog runner, a packer in a candy factory, an editorial assistant, a legal assistant, and a freelance writer. She has lived in many places (including Sydney, New York City, Boston, London, Austin, and Jacksonville, Florida), and she currently lives in the Boston area. Her epic fantasy novels set in the Graceling Realm--Graceling, Fire, and Bitterblue--have won many awards and much high praise, including picks as ALA Best Books for Young Adults, School Library Journal Best Book of the Year, Booklist Editors Choice, and Publishers Weekly Best Book of the Year. In addition, Graceling was shortlisted for the William C. Morris Debut Award and Fire is an Amelia Elizabeth Walden Book Award Winner.

"[U]nlike anything I've read—mysterious, precise, and possessed of a pure, clear mood that stays intact even through the genre shifts. It's a wild gift for readers who like books that take them to unexpected places, by unexplored avenues, reminding us of the thrillingly infinite possibilities of story."—Melissa Albert, B&N Blog, author of Hazelwood

"As soon as I'd finished the first page of Jane, Unlimited, I was hooked, and the minute I finished the novel, I wanted to begin it again. The story held me enthralled with its unexpected twists, hidden identities, and secrets revealed. Once again, the brilliant Kristin Cashore has created a mesmerizing, unforgettable world."—Gretchen Rubin, bestselling author of Better Than Before

"Absolutely addictive and fascinating, Jane, Unlimited is storytelling at its best. Filled with spies, stolen artwork, cute dinosaurs, new worlds, and delicious romance, this book is everything you could hope for and more than you can imagine."—Marie Rutkoski, author of The Winner's Curse

"This excellent, genre-bending title is a great pick for teens looking for something challenging to take them off the well-beaten path of standard YA fare."—School Library Journal (starred review)

"This is a true tour de force of genre mashups, and it will satisfy a wide range of readers."—BCCB (starred review)

"Creation, compassion, and choice repeatedly emerge as themes in this ambitious, mind-expanding novel."—Booklist

"Fans will enjoy the worldbuilding in this genre-hopping mystery. . . . [and] imaginative and witty storytelling, along with the novel's many memorable characters."—VOYA

"[U]nlike anything I've read—mysterious, precise, and possessed of a pure, clear mood that stays intact even through the genre shifts. It's a wild gift for readers who like books that take them to unexpected places, by unexplored avenues, reminding us of the thrillingly infinite possibilities of story."—Melissa Albert, B&N Blog, author of Hazelwood


Praise for The Graceling Realm books:
"Transcends the genre with its emotional and philosophical weight."—BCCB, starred review (Bitterblue)

"Cashore is that rare gifted writer who can give a fantasy novel real depth."—Los Angeles Times (Fire)

"There are some books that stick with you for years, and Kristen Cashore's FIRE is one of them. Thoughtful, steamy and completely original, FIRE is YA fantasy at its absolute best."—Sabaa Tahir, author of New York Times bestselling Ember in the Ashes (Fire)