Careless People: Murder, Mayhem, and the Invention of The Great Gatsby (Paperback) 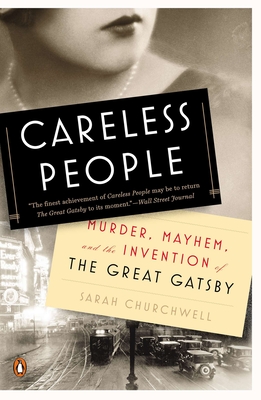 The autumn of 1922 found F. Scott Fitzgerald at the height of his fame, days from turning twenty-six years old, and returning to New York for the publication of his fourth book, Tales of the Jazz Age. A spokesman for America’s carefree younger generation, Fitzgerald found a home in the glamorous and reckless streets of New York. Here, in the final incredible months of 1922, Scott and Zelda Fitzgerald drank and quarreled and partied amid financial scandals, literary milestones, car crashes, and celebrity disgraces.

Yet the Fitzgeralds’ triumphant return to New York coincided with another event: the discovery of a brutal double murder in nearby New Jersey, a crime made all the more horrible by the farce of a police investigation—which failed to accomplish anything beyond generating enormous publicity for the newfound celebrity participants. Proclaimed the “crime of the decade” even as its proceedings dragged on for years, the Mills-Hall murder has been wholly forgotten today. But the enormous impact of this bizarre crime can still be felt in The Great Gatsby, a novel Fitzgerald began planning that autumn of 1922 and whose plot he ultimately set within that fateful year.

Careless People is a unique literary investigation: a gripping double narrative that combines a forensic search for clues to an unsolved crime and a quest for the roots of America’s best loved novel. Overturning much of the received wisdom of the period, Careless People blends biography and history with lost newspaper accounts, letters, and newly discovered archival materials. With great wit and insight, acclaimed scholar of American literature Sarah Churchwell reconstructs the events of that pivotal autumn, revealing in the process new ways of thinking about Fitzgerald’s masterpiece.

Interweaving the biographical story of the Fitzgeralds with the unfolding investigation into the murder of Hall and Mills, Careless People is a thrilling combination of literary history and murder mystery, a mesmerizing journey into the dark heart of Jazz Age America.

Sarah Churchwell is the Professor of American Literature and Public Understanding of the Humanities at the University of East Anglia. She is the author of The Many Lives of Marilyn Monroe and coeditor of Must Read: Rediscovering the Bestseller, and her literary journalism has been published widely. An American currently living in London, she is a regular broadcaster and contributor to the BBC.

The Wall Street Journal:
"Careless People blends biography, scholarship and literary journalism to generate a narrative that is almost novelistic in its urgency….Ms. Churchwell is committed not only to digging up long-forgotten historical nuggets but also to telling a well-crafted story....The finest achievement of Careless People may be to return The Great Gatsby to its moment. Time, place and the material world necessarily feed the imagination, and Ms. Churchwell presents a wealth of historical material that ought to inform any reading of Fitzgerald's great novel as a product of its era.”

USA Today:
“[A] compelling biography….The book is stuffed with wonderful and quirky cultural nuggets….Above all, Churchwell does a fantastic job of conjuring the magic of the Jazz Age, as well as its more lurid side. Regardless of how much of Fitzgerald's great novel was the result of fate, coincidence or pure imagination, it is fascinating to read about the era that shaped him, and to see how brilliantly he captured the happenings of his time.”

The Washington Post:
“[A] rewarding work, a history of 1922 as it was lived by the Fitzgeralds and their circle, as well as by the fictitious cast of The Great Gatsby. Like the jazz that defined the era, the book tells its story through digression and repetition, building up a pattern of internal references and refrains."

American Prospect:
“[T]he liveliest contribution to Fitzgeraldiana to come my way in years... [Churchwell’s] delight in everything she's dug up renews the novel's enchantments even for the Gatsby-wearied likes of me... a vivid and often witty account of all the zany, sad, ridiculous things that Scott, Zelda and their fellow Jazz Age glitterati got up to during the boozy summer and autumn of 1922... impressively researched.”

Entertainment Weekly:
“If you put all the books about F. Scott Fitzgerald in a stack, the resulting tower would be—apologies for the scientific jargon—really, really tall. In fact, it would almost certainly fall over. So it takes a bold writer to try tossing another one on the pile—and here comes one now! Sarah Churchwell’s Careless People concerns the writing of The Great Gatsby and the cultural and societal forces that inspired its superdrunk author. The book’s an unusual mix of criticism, biography, and true crime, all of it bound together by Churchwell’s lyrical prose and, frankly, the sheer force of her will. Not everything is new here (how could it be?), but it's an evocative read. It belongs on the tower, even if somebody else’s book has to come off. A-”

Newsday:
“Sarah Churchwell’s zesty cocktail of history, biography and literary criticism (with a dash of philosophical musing) so vividly captures the disordered existence of F. Scott and Zelda Fitzgerald during the 18-month sojourn on Long Island that inspired his greatest novel, many readers will close her book astonished that Scott managed to write The Great Gatsby at all....She does a brilliant job of re-creating ‘the world that prompted F. Scott Fitzgerald to write The Great Gatsby,'….Insights such as this make Careless People a book that anyone who cares about The Great Gatsby will want to read.”

The Chronicle of Higher Education:
“Churchwell introduces real-life equivalents of Fitzgerald’s characters, and she follows the stories in their morning papers. The results are often as glamorous, lurid, depressing, and fun to read as one would imagine… [Careless People] brings 1920s New York City vividly to life.”

Seattle Times:
“A thoughtful book that’ll be catnip to all Gatsby lovers….we’re given fascinating glimpses of social history.”

Minneapolis Star Tribune:
“Sarah Churchwell, in this utterly pleasing and thorough ‘biography of a book,’ brings the two views together in a worthwhile effort at achieving whole sight…. Re-read The Great Gatsby, read Careless People and, if you still have any lingering doubts, go see ‘The Wolf of Wall Street.’”

Boston Globe:
“The latest to fall under its spell is the scholar Sarah Churchwell, whose own seductive style borrows liberally from the novel….Grounded in archival evidence, but also richly speculative, her book is delightful reading for lovers of the novel and a provocative introduction for everyone else....[an] often fascinating reconstruction….Churchwell’s narrative has three principal strands: an account of the murder investigation, biographical information about Scott and Zelda, and a smart critical reading of the novel itself.”

Bookpage:
“Fascinating….Churchwell has produced an intriguing glimpse into how his mind worked, as he mined the Jazz Age innovations that still shape our world.”

The Millions:
“Sarah Churchwell has done something almost unimaginable: She has discovered something new and she has written something fresh and revealing about the most chewed-over piece of fiction in the American canon….Churchwell’s book is handsomely illustrated and her research into the existing source material is prodigious….A literary journalist and author of The Many Lives of Marilyn Monroe, Churchwell even unearthed a few morsels than no Fitzgerald scholars were aware of—most notably a letter by Fitzgerald about his intentions in Gatsby that was quoted in a lost review of the novel by Burton Rascoe. Churchwell, clearly thrilled by her spadework, calls Fitzgerald’s letter ‘a tiny, heart-stopping treasure….’ Careless People is a delightful blaze of a book….One of the chief virtues of Careless People is the way it leads the reader back to its source material.”

Kirkus Reviews (starred):
"Churchwell... has written an excellent book... she even manages to find fresh facts that escaped previous scholars... At times, Churchwell attempts Fitzgerald’s lyrical style—one chapter-ending sentence alludes to “the vagrant dead as they scatter across our tattered Eden”—she’s earned the right to play on his court. Prodigious research and fierce affection illumine every remarkable page.”

Publishers Weekly:
“[Sarah Churchwell] evokes the Jazz Age in all its ephemeral glamour and recklessness in her latest book….She excels at providing rich period details….the book highlights how accurately Fitzgerald intuited what was to come: the damage being done to American society by focusing on wealth; the way mass media would give rise to a celebrity culture.”

The London Review of Books:
“Churchwell brings… a lively curiosity, a gift for making connections, and an infectious passion for Fitzgerald and his greatest novel…. A suggestive, almost musical evocation of the spirit of the time.”

The New Statesman:
“The first readers of The Great Gatsby thought it was all about themselves, a book of the moment. Today, we tend to admire its enduring mythology of aspiration and undoing. Churchwell brilliantly brings these two perspectives together as she holds in counterpoint the sprawling stuff of Fitzgerald’s daily life and the gleamingly taut prose poem that emerged from it… Fitzgerald offered the year 1922 as the chief exhibit when he tried to explain the meaning of the jazz age. It is an exhibit worth looking at very carefully. Careless People does so with a mixture of patience and panache and it would take a long time to get bored of that particular cocktail.”

Sunday Telegraph:
“The wonder of Careless People ... is that it rewinds the years and allows the reader to appreciate again just how well Fitzgerald reflected his times.”

The Observer:
"A literary spree, bursting with recherché detail, high spirits and the desperate frisson of the jazz age."

Literary Review:
"A treasury of new material. Churchwell adds considerably to our understanding of the early 1920s, and how life for Fitzgerald played into the development of his art."

Corduroy Books:
“Not a second is wasted in this 350 or so page-turner. Careless People was fascinating. . . .It’s utterly smashing.”

Book Reporter:
“The Great Gatsby, like all great cultural highpoints, evolved, and Churchwell manages to infuse them all, boring and not, with an energy and drama that turns the book into a page-turner. . . . We feel so close to the action that we almost forget we are reading a history and not a daily diary account of the goings-on. Churchwell takes what could have been a treasure for literary theorists and turns it into a potboiler that could make great beach reading (or ski resort fireplace reading, I guess, given the season). Careless People is a highly recommended read for all. A thriller that combines history and fantasy is a rare and beautiful thing, and this book is just that.”