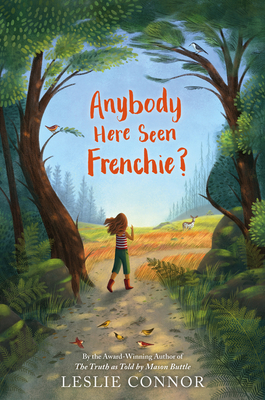 “A heartwarming story that celebrates neurodiversity, family, friendship, and a community coming together to face adversity with love, patience, and hope. Leslie Connor uplifts and inspires us to be kinder to ourselves and our world.”
— Alyssa Raymond, Copper Dog Books, Beverly, MA

A big-hearted, beautiful, and funny novel told from multiple viewpoints about neurodiversity, friendship, and community from the award-winning author of The Truth as Told by Mason Buttle, Leslie Connor.

Aurora is bouncy, loud and impulsive—“a big old blurter.” Making friends has never come easily. When Frenchie, who is autistic, silently chose Aurora as his person back in third grade, she chose him back. They make a good team, sharing their love of the natural world in coastal Maine.

In the woods, Aurora and Frenchie encounter a piebald deer, a rare creature with a coat like a patchwork quilt. Whenever it appears, Aurora feels compelled to follow.

At school, Aurora looks out for Frenchie, who has been her classmate until this year. One morning, Frenchie doesn’t make it to his classroom. Aurora feels she’s to blame. The entire town begins to search, and everyone wonders: how is it possible that nobody has seen Frenchie?

At the heart of this story is the friendship between hyper-talkative Aurora and nonvocal Frenchie. Conflict arises when Aurora is better able to expand her social abilities and finds new friends. When Frenchie goes missing, Aurora must figure out how to use her voice to help find him, and lift him up when he is found.

Featuring a compelling mystery and a memorable voice, this is a natural next-read after Leslie Connor’s The Truth as Told by Mason Buttle.

“Leslie Connor brilliantly depicts a genuine and meaningful friendship between a dynamic girl and her nonvocal friend. By showing the ways Aurora and Frenchie communicate, Connor gives us a blueprint for seeing autistic children in a new light. I loved, loved, loved this book!” —Cammie McGovern, author of Frankie and Amelia and Chester and Gus

Leslie Connor is the author of several award-winning books for children, including two ALA Schneider Family Book Award winners, Waiting for Normal and The Truth as Told by Mason Buttle, which was also selected as a National Book Award finalist. Her other books include All Rise for the Honorable Perry T. Cook, Crunch, and The Things You Kiss Goodbye. She lives in the Connecticut woods with her family and three rescue dogs. You can visit her online at www.leslieconnor.com.

"In this nuanced novel, Connor gives readers an authentic friendship between two neurodivergent kids, each of whom has a deep appreciation of the natural world. Through Aurora, we see Frenchie’s humanity; in turn, Aurora’s patience, perceptiveness, and empathy shine—traits that few of her peers bother to notice. Connor weaves experiences from the friends’ recent past into the present drama, adding complexity to the story and characters. Aurora’s assured first-person voice is funny, heartwarming, and keenly observant. Intermittent chapters are narrated in the third person from the perspective of a few key characters, which heightens the tension and moves the finely crafted plot forward to a well-earned happy resolution." — Horn Book Magazine

"Connor creates a playground of a coastal Maine town where the quirky locals are accessible and caring. Aurora’s and Frenchie’s families build an ecosystem that sustains and encourages their friendship, and Aurora’s buoyant enthusiasm infuses the story with adventurous fun and a lack of preachiness while not undercutting real stakes . . . Honors the sweet mysteries of how to communicate with each other and the world." — Kirkus Reviews

"Told from multiple points of view and flashbacks, Connor (The Truth as Told by Mason Buttle, 2018) utilizes elements of suspense and pastoral literature to create an engaging story. A strong choice for readers seeking stories with neurodiverse characters or books with heartwarming friendships." — Booklist

PRAISE FOR THE TRUTH AS TOLD BY MASON BUTTLE: “In this sensitively written novel, Connor introduces a learning-disabled 12-year-old who will warm readers’ hearts and earn their respect with his honesty and compassion. Poignant and suspenseful, Mason’s story crystalizes an adolescent boy’s joys and fears as he comes into his own.” — Publishers Weekly (starred review)

“Connor expertly captures the camaraderie of Calvin and Mason. A poignant underdog tale that will resonate with many young readers.” — School Library Journal (starred review)

“In a moving first-person narrative, Connor reveals a remarkably distinct and memorable character. [T]he author weaves the back story into a narrative of redemption chronicling his growing friendships. Connor’s gift for creating complex characters extends to the supporting characters and makes this a compelling read.” — Kirkus Reviews (starred review)

“Connor’s portrayal of Mason is spot-on, and the seventh-grader’s honesty shines through as his greatest attribute. Laced throughout the story, and evident at the end, is hope for a brighter future, both for the entire family and the community. A thoughtful look at human nature, resilience, and love.” — Booklist

“Mason’s voice is honest and true, and the multifaceted characters both enrich and propel the narrative.” — Horn Book Magazine