Hour of the Assassin: A Novel (Mass Market) 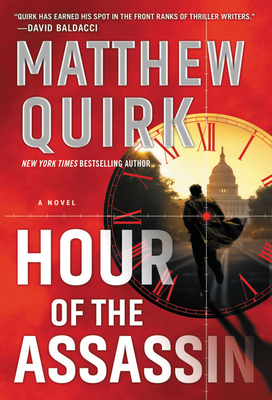 “Quirk has earned his spot in the front ranks of thriller writers. Opens with a bang and keeps exploding for three hundred pages." —David Baldacci, New York Times bestselling author of A Minute to Midnight

Framed and on the run for his life, a former Secret Service agent discovers how far some men will go to grasp the highest office in the land in this electrifying tale from the author of The Night Agent—a propulsive political thriller reminiscent of the best early Baldacci and Grisham novels.

As a Secret Service agent, Nick Averose spent a decade protecting the most powerful men and women in America and developed a unique gift: the ability to think like an assassin. Now, he uses that skill in a little-known but crucial job. As a “red teamer,” he poses as a threat, testing the security around our highest officials to find vulnerabilities—before our enemies can. He is a mock killer, capable of slipping past even the best defenses.

His latest assignment is to assess the security surrounding the former CIA director at his DC area home. But soon after he breaches the man’s study, the home’s inner sanctum, Nick finds himself entangled in a vicious crime that will shake Washington to its foundations—as all the evidence points to Nick.

Nick knows he’s the perfect scapegoat. But who is framing him, and why? To clear his name, he must find the truth—a search that leads to a dark conspiracy whose roots stretch back decades. The prize is the most powerful position in the world: the Oval Office.

To save himself and the people he loves, Nick must stop the men who rule Washington before they bury him along with their secrets.

“This one is a gritty, intense political thriller, filled with nuance and dire exploits. Totally entertaining. A treat from start to finish. —Steve Berry, author of The Malta Exchange

“Quirk has earned his spot in the front ranks of thriller writers. Opens with a bang and keeps exploding for three hundred pages." — David Baldacci New York Times bestselling author of A Minute to Midnight

“[A] gritty, intense political thriller, filled with nuance and dire exploits. Totally entertaining. A treat from start to finish."  — Steve Berry, author of The Malta Exchange

“Quirk crafts intense plots that crackle with a barely restrained energy... Damn hard to put down, and [I] blazed my way through it in less than a day… Quirk has once again written a story that stands out as one of the best thrillers you will read this year.” — Mystery Scene Magazine

“A cracking-good suspenser carried by some fine writing… and leading up to a sweaty-palms finale that goes on for 100 quickly turned pages.” — Library Journal

“Of all the literary genres, a suspense novel is highly dependent on a good hook. Matthew Quirk knows this better than anyone… His books do not begin with subtle language or mysterious foreshadowing. They begin with a bang, sometimes quite literally.”  — San Diego Union-Tribune

"The action never ceases in Quirk’s story, and you’ll find yourself reading way past your bedtime." — Newark Star-Ledger

"Quirk’s Hour of the Assassin…reads like a blockbuster from beginning to end. Trust me, if you’re looking for a great thriller to sink your teeth into, this is it. Quirk brings his very best here, delivering a stunning, page-turning reading experience that’s not to be missed." — TheRealBookSpy.com

A pitch-perfect and high-octane conspiracy action-adventure novel by an author with an impressive flair for original and narrative driven storytelling, "Hour of the Assassin" is a compelling read from start to finish -- and will prove to be an immediate and enduringly popular addition to community library collections.” — Midwest Book Review

“One of our great action thriller writers, so smart you barely notice him being smart—sophisticated in international politics as well as weaponry… Here, [the subject is] domestic political evil, probably too wicked and ingenious to be entirely true (we fervently hope), but hellishly convincing.” — Sullivan County Democrat

“Baldacci’s debut [Absolute Power] kept me awake half the night. I’m still a fan… I had the same reaction when I picked up The Night Agent… Best to start this at the beginning of a weekend, as you’ll be burning the midnight oil ‘til you’re finished.” — Newark Star Ledger on The Night Agent

“Quirk returns to the thriller scene with a thundering bang… Quirk’s latest feels like he’s been churning out political thrillers for decades, hitting on a timely plot that starts out fast and only speeds up as the story unfolds… [A] high-stakes, nail-biting political thriller.” — TheRealBookSpy.com on The Night Agent

“Lots of good, tense plotting… A real pleasure of espionage fiction is tradecraft secrets, and Quirk doesn’t disappoint.” — Booklist on The Night Agent

“The Night Agent is a whirlwind of a book, a captivating narrative that takes us inside the White House’s inner sanctum and the shadowy machinations surrounding it. A powerful and taut thriller.” —  Mark Greaney #1 bestselling author of Mission Critical, on The Night Agent

“Strap in for one hell of a ride. The Night Agent is full of twists and surprises you’ll never see coming.” —  Ben Coes, New York Times bestselling author of Bloody Sunday, on The Night Agent

“Matthew Quirk moves into David Baldacci and John Grisham territory with The Night Agent, a paranoid, pulse-pounding thriller that could not be more prescient. If you’re wondering where the best of the next generation of suspense talent is headed, look no further.” —  Joseph Finder

“Matthew Quirk is rapidly proving himself to be among our finest thriller writers, and The Night Agent is the latest undeniable evidence. Quirk writes rapid-fire, page-turning action with unusual grace and intelligence, and his latest American nightmare is guaranteed to keep readers up late.” — Michael Koryta, New York Times bestselling author of How It Happened