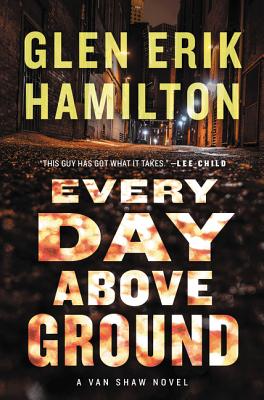 This is book number 3 in the Van Shaw Novels series.

A favor for a dying ex-con turns into a violent battle against a mysterious enemy for Van Shaw in this emotionally powerful and gritty thriller from the award-winning author of Past Crimes and Hard Cold Winter.

It sounds like a thief’s dream to Van Shaw: A terminally ill ex-con tells him of an easy fortune in gold, abandoned and nearly forgotten after its original owner died in prison. For the dying man, the money is a legacy to ensure his preteen daughter’s future. For Van, the gold is cash he desperately needs to rebuild his destroyed family home.

The grandson of a career criminal who taught him all the tricks of his trade, Van suspects that nothing is ever that easy. Sure enough, the safe holding the fortune is a trap—set by a mysterious player armed with tremendous resources and a lifetime of hatred. Now, Shaw’s partner is in the clutches of the hunters, and the former army ranger may be their next prey. But when the ex-con’s innocent daughter is threatened too, Van’s own hard childhood means he can’t let her come to harm.

To discover who has them in the cross hairs, Shaw must seek out the hunters’ real prey. His quest leads him from an underground bare-knuckle fighting ring, which may be fronting a darker purpose, to a massive pop-culture convention, where Van and his allies, Hollis and Corcoran, play a dangerous game with foes on every side. It also introduces Van to a brash and beautiful aspiring journalist who poses a whole different kind of personal risk.

For years, Van Shaw has tried to live every day above ground, on the right side of the law, even though crime is his gift . . . and in his blood. If he survives the coming storm, he’ll have to decide what he wants—and whether he can live as an outlaw without sacrificing his honor.

A native of Seattle, Glen Erik Hamilton grew up aboard a sailboat, and spent his youth finding trouble around the marinas and commercial docks and islands of the Pacific Northwest. He now lives in Burbank, California, with his family, punctuated by frequent visits to his hometown to soak up the rain.

“<i>Every Day Above Ground</i> is utterly addictive. A taut, riveting thriller with every nuance striking a perfect chord. The plot is gripping, the fighting realistic, and the characters well developed. Glen Erik Hamilton can flat-out write with the best of the best.”
— ROBERT DUGONI, New York Times bestselling author