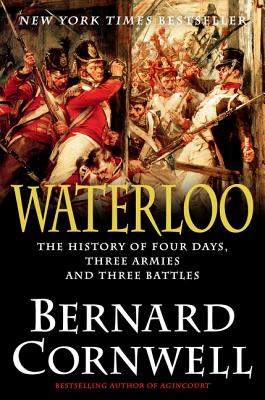 By Bernard Cornwell
$35.00
Have a question? Please let us know and we will reply as soon as we can. Thanks!

From the New York Times bestselling author and master of martial fiction comes the definitive, illustrated history of one of the greatest battles ever fought—a riveting nonfiction chronicle published to commemorate the 200th anniversary of Napoleon’s last stand.

On June 18, 1815 the armies of France, Britain and Prussia descended upon a quiet valley south of Brussels. In the previous three days, the French army had beaten the Prussians at Ligny and fought the British to a standstill at Quatre-Bras. The Allies were in retreat. The little village north of where they turned to fight the French army was called Waterloo. The blood-soaked battle to which it gave its name would become a landmark in European history.

In his first work of nonfiction, Bernard Cornwell combines his storytelling skills with a meticulously researched history to give a riveting chronicle of every dramatic moment, from Napoleon’s daring escape from Elba to the smoke and gore of the three battlefields and their aftermath. Through quotes from the letters and diaries of Emperor Napoleon, the Duke of Wellington, and the ordinary officers and soldiers, he brings to life how it actually felt to fight those famous battles—as well as the moments of amazing bravery on both sides that left the actual outcome hanging in the balance until the bitter end.

Published to coincide with the battle’s bicentennial in 2015, Waterloo is a tense and gripping story of heroism and tragedy—and of the final battle that determined the fate of nineteenth-century Europe.

BERNARD CORNWELL is the author of over fifty novels, including the acclaimed New York Times bestselling Saxon Tales, which serve as the basis for the hit Netflix series The Last Kingdom. He lives with his wife on Cape Cod and in Charleston, South Carolina.

“At the end of ‘Waterloo,’ readers will feel that they could command a battalion themselves. With historical accounts like this, who needs novels for excitement?”
— Wall Street Journal

“Waterloo may be a well-mined topic, but this new presentation is bound to satisfy lovers of military history….[Cornwell] injects a human element into a thorough and entertaining account.”
— Publishers Weekly

“No one, not even the great military historian John Keegan, describes or explains battle better than Cornwell….Cornwell illustrates so clearly and with such an assured sense of pacing that this messy and confusing set of battles is easier to follow, understand, and thus appreciate.”
— Library Journal, starred review

“Both vivid and scholarly….Readers new to the Waterloo campaign could hope for no better introduction and veterans will find fresh insights.”
— The Independent

“A great and terrible story told with energy and clarity by a writer who has a deep understanding of men in combat and why they do what they do.”
— The Economist

“The history of the Battle of Waterloo told by a master storyteller.”
— Shelf Awareness

“In his first nonfiction book, acclaimed historical novelist Cornwell (The Empty Throne, 2015, etc.) employs his storytelling skills to bring military history out of the textbook…. A fascinating, detailed, and generously illustrated description of the battle that changed the fate of 19th-century Europe.”
— Kirkus Reviews

“Bernard Cornwell proceeds at a brisk canter and his descriptions of the fighting are as gripping as any in his splendid Sharpe novels.”
— The Times (London)

“A lot of historians could learn from Cornwell’s approach. He sets the scene, fleshes out the main characters and lets the story unfold to its dramatic conclusion. An excellent first foray into non-fiction.”
— Evening Standard (London)

“Brings a shrewd military historian’s mind to his subject…thrilling to read…Cornwell’s is from start to finish a gripping account, red in tooth and claw. Serve with a robust burgundy.”
— The Spectator

“Bernard Cornwell’s lively account of Waterloo...is a clear account...Cornwell is a storyteller....for those who want a.... reliable guide to what happened at Waterloo, he has great appeal. His book is also superbly illustrated”
— New Statesman

“As you would expect from a writer who is the acknowledged expert on the Napoleonic Wars he is superb on the tiny details as well as on the bigger picture.”
— Daily Express (London)

“Cornwell has found deserved popularity with his Sharpe series of historically accurate novels set in the Napoleonic Wars. For the first time, he turns his gung-ho novelist’s skill to an actual account of the supreme battle of the conflict…. Written with all the excitement of a popular novel.”
— Literary Review

“A real page-turner… in which Cornwell shows real insight into the Waterloo campaign.”
— BBC History Magazine

“This master storyteller’s take on events comes highly recommended to those new to the genre and Waterloo aficionados alike.”
— Soldier Magazine