Jesus Wants to Save Christians: Learning to Read a Dangerous Book (Paperback) 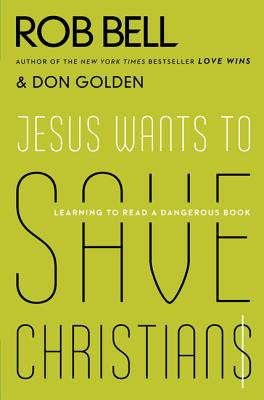 “Bell and Golden trace redemption from Genesis to Revelation...[delivering] a tough message the American church needs to hear.”
—Christianity Today

“Equal parts prophetic warning and call to action, Jesus Wants to Save Christians exhorts Jesus’s followers to sacrifice their comforts and hear the ‘cry of the oppressed.’”
—Grand Rapids Press

In Jesus Wants to Save Christians, Rob Bell, the New York Times bestselling author of Love Wins joins with Don Golden, Christian activist and vice president of World Relief, to call upon the church to break from its cultural captivity and challenge the assumptions of the American Empire. Bell, whom the New York Times calls “one of the country’s most influential evangelical pastors” and whom Time Magazine named one of the most influential people in 2011, is a pioneer in the movement seeking new Christian expression, and anyone who has ever questioned their faith or is those looking for answers they cannot find in their own church’s standard teachings will discover a new creed in Bell and Golden’s provocative and spiritually enlightening work.

Rob Bell is a New York Times bestselling author, speaker, and spiritual teacher. His books include Love Wins, How to Be Here, What We Talk About When We Talk About God, Velvet Elvis, The Zimzum of Love, Sex God, Jesus Wants to Save Christians, and Drops Like Stars. He hosts the weekly podcast The Robcast, which was named by iTunes as one of the best of 2015. He was profiled in The New Yorker and in TIME Magazine as one of 2011’s hundred most influential people. He and his wife, Kristen, have three children and live in Los Angeles.

“Bell is at the forefront of a rethinking of Christianity in America.”
— Time magazine

“One of the country’s most influential evangelical pastors.”
— New York Times

“One of the nation’s rock-star-popular young pastors.”
— USA Today

“Rob Bell is one of the hottest names in contemporary evangelical life.”
— Boston Globe

“This dramatic book is politically charged but not party-bent, bearing a message evangelicals need: that Jesus didn’t come just to save people for heaven someday but to transform his followers and the physical world now.”
— Publishers Weekly

“Equal parts prophetic warning and call to action, Jesus Wants to Save Christians exhorts Jesus’ followers to sacrifice their comforts and hear the ‘cry of the oppressed’-the hungry and poor about whom God cares deeply.”
— Grand Rapids Press

“Bell and Golden present a clarion call for a justice emphasis within Christianity and, given the nightmarish developments in the U.S. and the world, it could not have come at a better time!”
— Spirituality and Practice