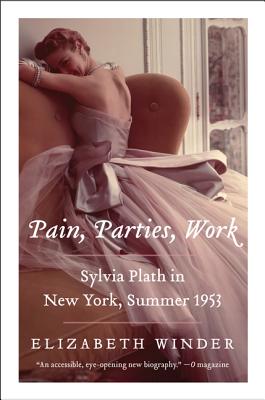 What we know about Sylvia Plath’s twenty-six days as a guest editor at Mademoiselle magazine comes from her one and only novel The Bell Jar. A twenty-year old Plath arrived in New York City in the summer of ’53 ready for the experience of a lifetime. What she got was an assignment that would send her to the brink and back. Her time in the city would end up changing the way she saw herself, her friends, her family, her future. Winder interviews many of Plath’s fellow guest editors who worked alongside her and were witness to the metamorphosis of a girl who was quickly becoming the writer of her generation. Stunning in all its detail, this will redefine what you thought you knew about a bright flame that was extinguished far too quickly.

Pain, Parties, Work by Elizabeth Winder is a compelling look at a young Sylvia Plath and the life-changing month that would lay the groundwork for her seminal novel, The Bell Jar.

In May of 1953, a twenty-one-year-old Plath arrived in New York City, the guest editor of Mademoiselle’s annual College Issue. She lived at the Barbizon Hotel, attended the ballet, went to a Yankee game, and danced at the West Side Tennis Club. She was supposed to be having the time of her life. But what would follow was, in Plath’s words, twenty-six days of pain, parties, and work, that ultimately changed the course of her life.

Thoughtful and illuminating, featuring line drawings and black-and-white photographs, Pain, Parties, Work: Sylvia Plath in New York, Summer 1953 offers well-researched insights as it introduces us to Sylvia Plath—before she became one of the greatest and most influential poets of the twentieth century.

Elizabeth Winder is the author of a poetry collection. Her work has appeared in the Chicago Review, Antioch Review, American Letters, and other publications. She is a graduate of the College of William and Mary, and earned an MFA in creative writing from George Mason University.

“An illuminating biography . . . which floods clarifying light on a chapter of the poet’s early life that Plath painted in jaundiced tones in The Bell Jar.”
— New York Times, Sunday Styles Feature

“The world of ’50s NYC, in all its glamour, is irresistible reading.”
— Meg Wolitzer, author of The Interestings

“Will recalibrate your mind and heart. . . . We knew about Plath’s ambition - and angst - but her penchant for flaming-red lipstick and princess heels was a bit of a surprise”
— More magazine

“A pixilated gem of a book. . . . In prose as delightful and lively as the champagne Sylvia liked to sip at the St. Regis ball, Winder has made Pain, Parties, Work a prose poem of the senses, and a true account of The Bell Jar.”
— Sam Kashner and Nancy Schoenberger, New York Times bestselling authors of Furious Love

“A lovingly detailed inventory, as Technicolor-vivid as a Douglas Sirk film, of the fashions and foods that filled Plath’s summer. Winder convincingly shows that Plath should be recognized as much for her enjoyment of life and her enduring works as for her tragic death.”
— Publishers Weekly

“Winder poignantly captures a snapshot of a time that directly inspired one of Plath’s most famous works. She also captures Plath as bright, vivacious . . . For fans, particularly devotees of The Bell Jar.”
— Library Journal

“Winder resuscitates a young woman who, while sick, is electrically alive to her first real adventure. . . . Captivating . . . [Winder] makes a compelling argument that in New York…Plath moved closer to finding the voice that would define her writing.”
— Slate

“Winder describes the aesthetics of the era beautifully. . . . Reading this book sparks feelings of impossible nostalgia for someone who didn’t live through the fifties; in this way, it is an experience akin to watching Mad Men.”
— Bookslut

“Winder has painstakingly sketched a fully fleshed out portrait of Plath’s life during that hot, seminal summer, offering a glimpse into the raison d’etre behind Plath’s revered 1963 roman a clef, The Bell Jar. . . . Winder goes into the dizzying, delightful detail.”
— USA Today